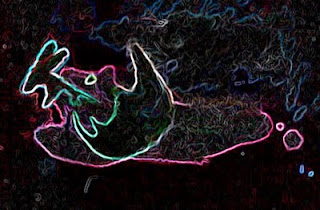 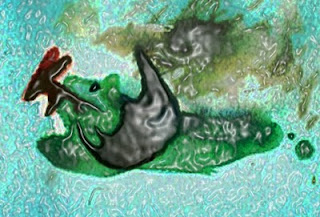 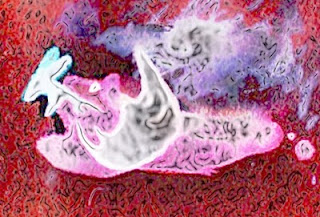 Hi Everyone!!! This early morning posting was inspired by my watercolor paint discards. The illustration was derived from my own self imposed Rorschach test which I stared at until I saw the image of a flying green puppy. The Rorschach inkblot is a psychological test in which subjects' perceptions of inkblots are recorded using psychological interpretation. I'm feeling a little better today, but I've been moving slow and I had to scrape myself out of bed to finish my posting. Nighty night. xxoo

The Green Puppy Hero
The green puppy hero
Zooming through the air
At the speed of light
From Paris to Tokyo
From Anchorage to Mazatlan
From here to there
From on and on
Removing negativity
Disguised as little red bunnies
Spotting them with x-ray eyes
And attracting them with honey
It is a sticky, sticky, sticky mess
But the green puppy hero is
A clever hunter
With the fluid movements
Of a Tai kwon-do master
She extracts her prey
Upwards and onwards
The green puppy hero
Removes red bunnies
At least 10,000 per day
Copyright 2010 - LAM
Posted by Unknown at 2:24 AM

Promote Your Page Too